A Count and two Bishops
The surname “van Cuyck” appears for the first time in a charter of 1096: a man named Henricus de Cuck or Hendrik van Cuyck (II.1) is mentioned as a family witness in a charter of (Saint) Ida of Lorraine, countess of Boulogne, and her son, the famous crusader Godfrey of Bouillon.[1] Hendrik van Cuyck was the oldest son of Saint Ida’s daughter, also named Ida, and Herman van Malsen. Hendrik is mentioned again in 1101 and 1108 as a witness in charters of the Bishop of Utrecht. Hendrik married (ca. 1100) Alveradis, Countess of Hochstaden. They had three sons and one daughter: Godfried, Herman, Andreas and Aleydis. He died before 9 August 1108. His wife is mentioned for the last time in 1131.
The second son of Ida and Herman, Andreas van Cuyck (II.2), developed an impressive ecclesiastical career.[2] He is mentioned as archdeacon of the Kempen and provost of Emmerik (in the county of Gelre). From 1112 until 1128 we find him in Liège: archdeacon and provost of Saint-Pierre (1112), archdeacon of Saint-Lambert (1116), provost of Saint-Lambert (1119-1128).
When Otbert, Bishop of Liège, died on 31 January 1119, the names of two candidates were brought up: Frederick of Namur and Alexandre. Andreas van Cuyck supported Frederick and thus belonged to the so-called papal party who defended the episcopal election clero et populo. The supporters of Alexandre represented the imperial party. The Electoral College, an assembly of ecclesiastical and lay dignitaries, chose Frederick, while the emperor appointed Alexandre to be the next Bishop of Liège. A war broke out and in the end Frederick was poisoned by one of his servants; he died on 27 May 1121. After the murder, Andreas van Cuyck acted as interim Bishop until Albero I of Louvain was ordained in 1123.[3] During that period Andreas struck coins with his name on it.[4]
In 1128 he was elected bishop of Utrecht. He was the first bishop of Utrecht since the Concordat of Worms in 1122, where the Investiture Controversy between the emperor and the pope over the right to appoint bishops was decided in favor of the pope. Andreas was naturally allied to the papal party.[5] He died on 23 June 1139.
Godfried van Cuyck (II.3), the youngest son of Ida and Herman also developed an ecclesiastical career. He is first mentioned in 1120, when he was provost of Saint-Severin in Cologne (until 1132). From 1128 to 1134 he was provost of Xanten and thus also archdeacon of Duisburg, Stralen/Süchteln, Maas and Waal, and Xanten. Later he was canon in Steinfeld.
In 1131 Godfried was elected Bishop of Cologne, but Emperor Lothar III refused to confirm this, probably because the power of the van Cuyck family was increasing so rapidly. The Emperor annulled the election and some time later Bruno II of Berg, son of the Count of Berg, became the new Archbishop. For several years Godfried asserted his claim on the episcopal chair, but in 1134 he withdrew. The year of his death is unknown.

A powerful family
Already in the early 12th century the van Cuyck family was able to secure a powerful position in the broad region around Cuijk. Their allodial possessions combined with the fiefs they held constituted a vast amount of landed property, almost as vast as those of the Counts of Holland.[6]
Hendrik van Cuyck’s brothers held important ecclesiastical offices in Liège, Utrecht, Cologne and Xanten. His second son and successor Herman van Cuyck (III.2) became comes Trajectensis or count of Utrecht, a title probably granted by his uncle Bishop Andreas van Cuyck. Herman was also advocate (lay lord charged with the protection and representation in secular matters) of the collegial church of Saint-Servatius in Maastricht. Another son of Hendrik, Andreas van Cuyck (III.3) was provost of the chapter of Saint-Peter in Utrecht.
The power of the van Cuyck family also increased through clever marital politics. They were closely related to the houses of Boulogne and Lorraine (marriage of Herman van Malsen) and to the important Rhineland family van Hochstaden (marriage of Hendrik van Cuyck). Hendrik’s daughter Aleydis van Cuyck (III.4) became the wife of Arnold, lord of Rode, who ranked among the high nobility of that time.[7] After Arnold’s death she married Albert II, count of Nörvenich-Molbach; their daughter Alveradis would later become the wife of the count of Gulik.[8] Hendrik’s oldest son Godfried van Cuyck (III.1) married Ida (or Juditha, Jutta), only daughter and heir of Frederik, Count of Arnsberg, and Aleydis of Limburg, and became count of Arnsberg.[9]
​ 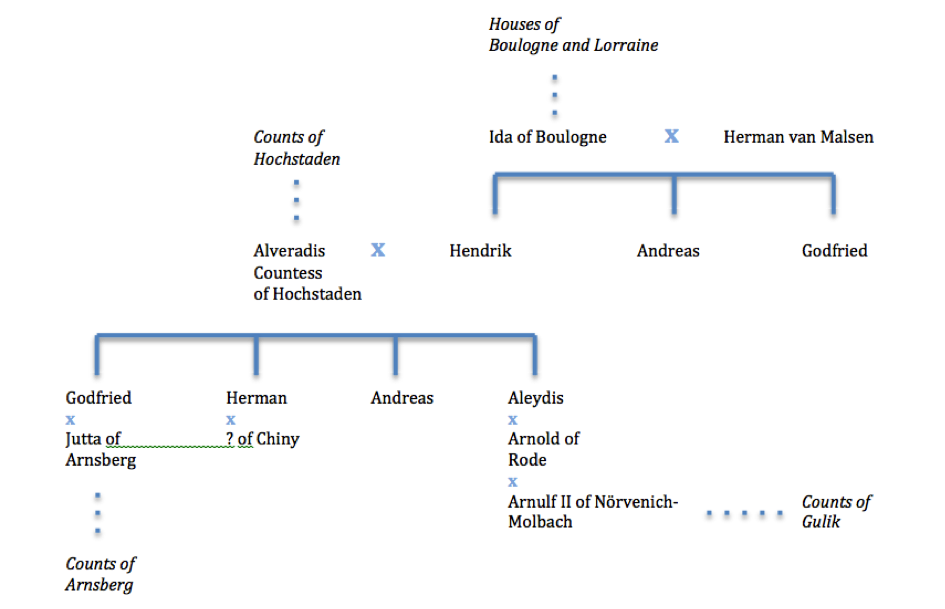 The foundation of Mariënweerd
As we have shown, the noble van Cuyck lineage counted among the most important nobles in the diocese of Utrecht and the central Dutch river era. They maintained a very good relationship with the Prince-Bishop of Utrecht and the alliance became even stronger when Andreas van Cuyck became Bishop of Utrecht in 1128. One year later, when the family was at the peak of its power, they founded the abbey of Mariënweerd.[10]
It was Alveradis, widow of Hendrik van Cuyck, with consent of her sons Herman and Godfried, who founded the Premonstratensian abbey of Mariënweerd. She donated the land of Herigerwaard on the borders of the river Linge, where the abbey was to be build. Walter, abbot of Saint-Martin in Laon, became abbot of the new abbey and was responsible for executing the foundation.
Originally Mariënweerd was a double monastery (or double house), combining a separate community of men (canons) and one of women (canonesses), joined in one institution. In the course of the 12th century these double houses were no longer accepted and in 1229 the canonesses of Mariënweerd were forced to move to the outlying estate of Zennewijnen.
Two Premonstratensian abbeys were founded under the wings of  (and dependent on) Mariënweerd: Berne (1134) and Wedinghausen (1173). Other convents were also placed under the supervision of Mariënweerd: Koningsveld (Delft) in 1252, the Magdalena-convent (Nijmegen) in 1344 and the convent of Saint-Anthony (Haarlem) in 1484.
Mariënweerd became an important and powerful abbey. By the beginning of the 13th century the abbey owned property in Holland, Gelre, Utrecht, Buren and the Land of Cuijk. They managed their land through monastic farming estates exploited by lay brothers under the supervision of a canon. Next to this the abbey also obtained the right to levy tolls in Kleef, Holland and Brabant, which was an important source of income. The abbot developed a large network both in the ecclesiastical and in the lay world. On several occasions he acted as commissarius apostolicus or commissary appointed by the pope to act on his behalf. From the 13th century onwards the abbey obtained the right to appoint the pastor in different parishes. As a consequence they collected the tithes in these parishes, a significant source of income. There is no doubt: Mariënweerd was a very prosperous institution. But the abbots were also known for their virtue and piety. Next to the weekly distribution of alms and occasional gifts of clothes and money, twice a year they provided bread and beer for thousands of poor people. In 1335 they founded a guesthouse in Beesd and the canons were involved in the activities of several charitable houses.
Founding a Hauskloster matched the status of the van Cuyck family at the beginning of the 12th century. They granted the abbey considerable estates and financial support and we may assume that members of the family were buried in the abbey church. Even though the family would keep on favouring the abbey, the originally strong connection between the family and Mariënweerd weakened in the course of the 13th century.[11] This had a lot to do with the drama of 1133 that largely affected the family’s fate.

The murder on Floris the Black
The future looked bright for the van Cuyck family. They were powerful and very well connected. They were acting on the same level as the counts of Holland and Gelre. But a dramatic event abruptly changed their destiny. The principal actor was Floris the Black.
Floris was the younger, but very ambitious brother of Dirk VI, count of Holland (1122-1157). According to the Annals of Egmond Abbey he was a very intelligent and charming man. In 1129 he openly rebelled against his brother and became count of Holland himself. He was recognized by his uncle King Lotharius III and by Andreas van Cuyck, Bishop of Utrecht (son of Herman van Malsen). Floris and Dirk were reconciled in 1131, although the conflict was never entirely resolved.
In 1132-1133 Floris made plans to marry Heilwig (or Heylwiva), daughter of Arnold of Rode and Aleydis van Cuyck.[12] Floris probably was 18 years old at that time, while Heilwig could not have been older than 12 (the common age for girls to get married). Descending from the noble and powerful lineages of Cuyck and Rode, the girl was considered a good catch. Her father being deceased, her uncle Herman van Cuyck acted as her guardian. And he turned down the marriage proposal!
Floris violently usurped the possessions of his bride to be, but Herman did not change his mind: he would not allow his niece to marry Floris. A serious conflict between Holland and Cuyck arose after Floris had plundered Herman’s possessions. Andreas van Cuyck, Bishop of Utrecht and uncle of Herman, got involved in the conflict and was forced to leave the town after Floris burnt down the episcopal fortress of Lexmond. Floris chased the canons and priests of Utrecht out of their houses, occupied the collegial church of Saint-Mary and used is as a brothel and a stable for his horses! Bishop Andreas excommunicated him, but Floris was not impressed. Herman van Cuyck assembled an army and attacked Floris while he was hunting in the neighbourhood of Utrecht: Floris was killed in Abstede on 26 October 1133.[13]
The murder was a great opportunity for other families to weaken the position of the powerful van Cuycks. Dirk VI, count of Holland, wanted to avenge the murder on his brother. He got support from the Emperor for Lotharius III was the half brother of Petronilla, the mother of Dirk and Floris.[14] Together with the Counts of Kleef and Gelre, they invaded and devastated the territories of the van Cuycks. Their castle at Cuijk was destroyed. Godfried and Herman were banned, forced to leave their lands (Arnsberg and Cuijk) and retreat to their allodial possessions in the environment of Geldermalsen.
Lotharius III died in 1137 and the van Cuycks reconciled themselves with the count of Holland. At that moment Herman became a vassal of the count of Holland and donated several allodia to him. Herman never rebuilt the castle at Cuijk, but constructed a new one at Grave.