New Beginnings: from Gelre to Culemborg

Introduction
At the beginning of the 14th century the Lords of Cuijk were at the height of their power. Jan I van Cuyck (+ 1308) was a top European diplomat in his time. He acted as ambassador, negotiator, counselor, arbiter, witness and knight. Princes and kings employed his services and he ranked among the high nobility of his time. Jan's son Otto van Cuyck (+ 1350) committed his town of Grave to the Duke of Brabant, from whom he received it back as a fief. He was the Duke’s principal vassal and also, like his father, became a pensioner of the English King Edward III. But Otto left behind a financial battlefield and his descendants were no longer able to maintain the important position of the Cuyck family. The position of the Lords of Cuijk declined rapidly. They lost power, had financial problems and quarreled over possessions and land. In 1356 the Land of Cuijk became a fief of Brabant. Jan V van Cuyck (+ 1382) sold Hoogstraten to his cousin Jan IV of Hoogstraten and Asten to Gerard van Berkel and Ricoud de Cocq.
Wenemar van Cuyck and his son Jan VI van Cuyck got caught in the middle of a conflict between Brabant and Gelre. The Cuycks were vassals of the Duke of Brabant, but through his marriage Wenemar was related to the Duke of Gelre. Wenemar supported Gelre and in 1384 even arranged a marriage between his son Jan VI and Johanna, illegitimate daughter of Willem of Gelre. And Wenemar’s oldest daughter Johanna, who became Lady of Cuijk in 1394, married Willem, an illegitimate son of Willem of Gelre.
In 1400 the conflict between Brabant and Gelre was definitively settled. The land of Cuijk was given to Gelre. Johanna’s (childless) marriage to Willem the Bastard of Gelre was annulled. She is mentioned for the last time in 1426 and died at an unknown time. 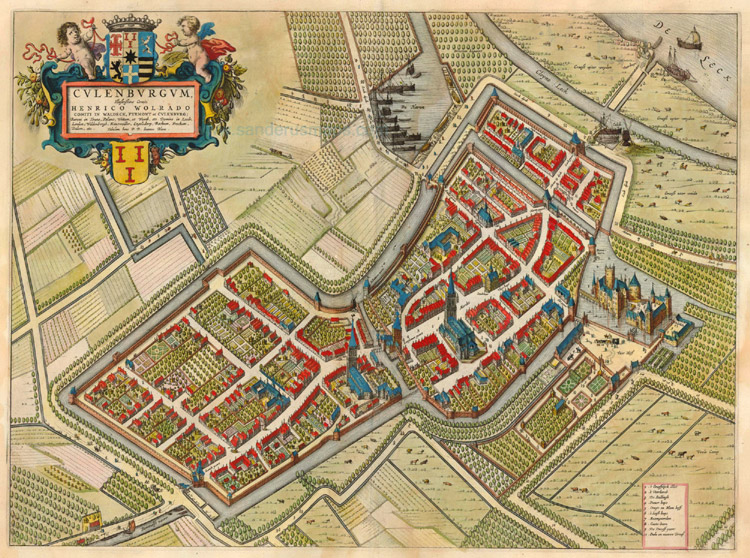 The descendants of Wenemar van Cuyck
According to the historian Coldeweij Wenemar van Cuyck was married to Aleydis de Cocq van Opijnen. This information is based on a document (September 1382) in which Hendrik van Est is called the brother-in-law of Wenemar genoemd. In 1384 this Hendrik van Est and Gijsbert de Cocq van Opijnen act as witnesses for Jan VI van Cuyck (son of Wenemar). Hendrik and Gijsbert are called brothers-in-law of  Wenemar and unckes of Jan VI.
Gijsbert de Cocq van Opijnen was provost of Utrecht. According to the Monumenta Van Buchel he was buried in the cathedral church: “Hic iacet sepultus venerabilis vir Giselbertus dictus Coc de Opinen, praepositus et archidiaconus Traiectensis, qui obiit anno MCCCXCI, XX mensis maii, amen”. If he was the brother-in-law of Wenemar and uncle of Jan VI, this means that Wenemar was married to Gijsbert's sister. What do we know about Gijberts family? An undated charter of the count of Gelre refers to the inheritants of Giesbrech die Cock, doempraist tUtrecht. The charter mentions Johan die Cock van Opijnen, Aleit, sijne adelsuster, heren Jan, heren Deric ende Gerit die Cock, gebroidere, Derijx Cocks kynderen. This means that Gijsbert had two brothers (Jan en Deric) and a sister (Aleid). At the tie the charter was issued, Deric had already died and his sons Jan, Deric and Gerit are mentioned as inheritants. Aleid's husband is not mentioned, but it is likely that she was married to Wenemar van Cuyck.
Hendrik van Est was also a brother-in-law od Wenemar. The relationship between the van Cuyck family and the van Est family is not clear. Van Bavel thinks that Hendrik van Est belongs to a bastard branch of the van Cuyck family. We find Hendrik in many sources. In 1385 the duke of Gelre lends a considerable amount of money Gisebert die Kock, doempraest tUtrecht. It is stipulated that Gijsbrecht must pay back the money to the duke or to Henrich van Est. In 1372 Hendrik van Est sells land in Est to the duchess of Brabant. In 1385 Hendrik van Est receives the house of Beesd as a fief; before that, the house belonged to Johan de Cocq van Opijnen; in 1390 Hendrik has to pass the house on to Jan VI van Cuyck. According to Van Winter the house in Beesd used to belong to provost Gijsbert de Cock van Opijnen who sold it to Hendrik van Est. The realtionships are not entirely clear, but we can assume that Wenemar van Cuyck, lord of Cuijk and Grave (1382-1390), was married to a girl from the de Cock van Opijnen family, lords of Est.
Wenemars' son, Jan VI, lord of Cuijk en Grave (1390-1394) was married to Johanna, bastard daughter of duke Willem of Gelre-Gulik. The marriage remained childless and Jan VI was succeeded by his oldest sister Johanna, Lady of  Cuijk (1394-1400), lady of Grave (1394-1399), lady of Meteren and Est (1400-ca. 1430). In 1394 she married Willem, bastard son of duke Willem of Gelre-Gulik, but six years later the marriage was annulled; the copple had no children. As we already explained, Johanna lost most of her land and titles. Her sister Elisabeth was the founding mother of van Cuyck van Meteren family. Katharina married the lord of Acqoy and Jutta married Willem Pieck.
Different sources refer to Jan VI as the oldest or legitimate son of Wenemar. This means that Wenemar had a second son and this son was also named Jan (it was not unusual to have two sons with the same name). In the "Brabantse Yeesten", a chronicle written by Jan van Boendale, the author also mentions two sons of Wenemar, both called Jan. On one occasion the author writes that this second Jan is an illegitimate son of Wenear, but on other occasions her refers to him as the younger son of Wenemar. This younger son Jan was probably born shortly before his father died in 1390.
When Jan VI died in 1394, the young Jan still was much too young to succeed his brother as Lord of Cuijk. And this was of course a perfect situation for the count of Gelre to overpower the Cuyck family. Johanna, Wenemar’s oldest daughter, succeeded her brother as Lady of Cuijk.
After Johanna van Cuyck married Willem the Bastard of Gelre, the couple resided mostly in their castle in the town of Grave. They had their own household of about 40 to 50 people. The accounts of the court of Gelre show us that several members of the Cuyck family lived at the court. They were legitimate and illegitimate children of Wenemar and Jan VI van Cuyck: “oude Kuycsken” and  “jonge Kuycsken” (or “aude Kuyc” and “jonge Kuyc”), also “Jonchere van Kuyc” (This Willem, Johanna's husband), “Goeswijn van Cuyck” and “Henneken van Kuyc bastart”.
Some Cuycks stayed at the court even after the marriage between Johanna and Willem had been annulled in 1400. One of them was Jan van Cuyck. He is mentioned in 1410 as “carremeester”, “voedermeester” and “korenmeester”. The cornmaster of Gelre was the receiver of the corn, an important function at the court. He is mentioned again in 1411: he has a vallet and he belongs to the household of the duke.
In 1410/11 Jan van Cuyck, the young brother of Lady Johanna van Cuyck, disappears from the court of Gelre. At that time Reinald IV of Gelre was involved in the war between the count of Holland and the Arkel family. When the peace treaty between Gelre and Holland was signed (1412) the Arkel family was banned and their possessions were confiscated. Because Jan was married to a girl from the Arkel family he was forced to leave the court of Gelre. The marriage also connected him to the clan of the “Kabeljauwen” who were at war with the “Hoeken”.

Jan van Cuyck in Culemborg
In 1424 a man named Jan van Cuyck (we will refer to him as Jan sr.) appears in Culemborg. Jan sr. van Cuyck and his son Jan jr. owned land in Redinchem, Kampen, Tricht, Altena, Gorinchem, Trichterbroek, Mastenbroek, Zoelmond, Culemborgerbroek, Everdingen, Paveien, Buurmalsen, Meteren, Corte Hoeven and Golberdingen. Some of these lands were acquired through acquisition, others seem to come from the core posessions of the Cuyck family: the so-called “allodia”.
Jan sr. and his son were also vassals of the lord of Arcen, of the “drost” of Arnhem for land in Rijswijk and of the lord of Culemborg for land in Beusichem, Parijs, Rol and Lang Avontuur. A farm in Welboren was kept as a fief of Vianen.
The fact that Jans sr. and his son owned a considerable amount of landed property that came from the “allodia” of the lords of Cuijk shows the relationship between the lords of Cuijk and the van Cuyck family in Culemborg. [1]