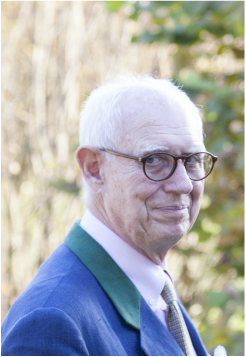 Horst van Cuyck was a unique man: bright, sharp-minded, astute, energetic, enthusiastic, impassioned, inspiring, warm-hearted and amiable.
It was a privilege to know him. He will never be forgotten.

Horst Bernhard Gerd Hans van Cuyck, born in Göttingen on 29 July 1939, was the youngest son of Ernst Merk (1903-1975) and Beatrice van Cuyck (1901-1990). He had two sisters and one brother: Ingrid, Armgard and Albert. His paternal grandmother, Marie Sedlmayr, was a descendant of the famous Munich Sedlmayr family, owners of the Spaten and Franziskaner breweries. His maternal grandfather, Hans Friedrich van Cuyck (1880-1943), married to Carolina Hayotte (1880-1961), was a paediatrician in Krefeld.

Up until 1945, due to the war, Horst van Cuyck mainly stayed in Walchsee (Austria), where the Sedlmayrs had a house. His father was captured in Courland on 11 May 1945 and remained in Russian captivity until October 1955.

Horst van Cuyck returned to Göttingen in 1947, where he attended school. After his Abitur in Bayreuth, he studied Business Administration in Munich and was simultaneously in training at the Deutsche Bank there. He worked as an employee of the Bayerische Vereinsbank in Munich and of Merrill Lynch in Frankfurt and Munich. In 1971, he became Deputy Manager of Merrill Lynch Munich, in 1973 Manager of E.F. Hutton Munich and in 1976 Manager of E.F. Hutton Germany.
From 1977, he became an independent business consultant and a few years later, he founded the company Diomedes AG in Meggen (Switzerland).

Heart for art and culture

​Horst van Cuyck was an avid collector of art and antiques. It was his passion for the arts that drove him to study Art History and Archaeology at the Ludwig Maximilian University of Munich between 1991 and 1994. From 2010 to 2015, he financed a Chair in Art History and an assistant position at the University of Bern. He was a member of the Board of Directors of the Bavarian National Museum and of the Friends of the Munich Philharmonic. Moreover, he belonged to the inner circle of the Munich Glyptothek.

Horst van Cuyck was passionate about history in general and the history of the van Cuyck family, in particular. He published several articles and book about this them and was also involved in several historical exhibitions, including The Legacy of Charlemagne (Ename, Oudenaarde, Provincial Heritage Centre, 9 May to 30 November 2014) and Offiziersehre und Widerstand. Das Reiterregiment 17 und die Wurzeln des Staatsstreiches vom 20. Juli 1944 (Ingolstadt, Bavarian Army Museum, permanent exhibition since 25 November 2014 in Reduit Tilly).